Buried family secrets, the Holocaust (from a Third Generation perspective) and how it is never too late to reclaim your heritage is at the heart of this winner of the Best Documentary at the Haifa International Film Festival. Siblings Michla and Feiv’ke Schwarz survived the Shoah, but never reunited after the war. Michla, Reuveny’s grandmother, moved to what would become Israel, and started her family there. Feiv’ke, considered dead, returned to East Germany, married a German woman, changed his name and lived amidst the concentration camp ruins where he was once a prisoner. The Israeli and German sides of the family lived unaware of each other for over 50 years until first-time filmmaker, Reuveny, unraveled what happened. Shown in commemoration of 50 years of Israeli-German diplomatic relations.

“The film reaches higher and wider than specific events.” 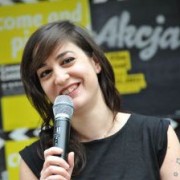 A graduate of the Sam Spiegel Film School, this granddaughter of Holocaust survivors moved to Berlin in 2005 and almost immediately began the a search for her grandmother’s long lost brother. The project eventually became Farewell, Herr Schwarz. She continues to work as a filmmaker in Germany and Israel.